Why schools aren't performing, from America's Finest News Source. Not safe for work or those offended by swearing, but really funny.
No comments: 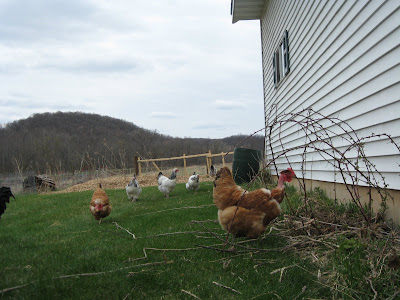 The Gentle Giant in profile: Little Z has never seen Star Trek, and yet: 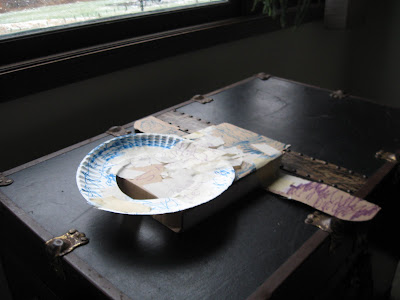 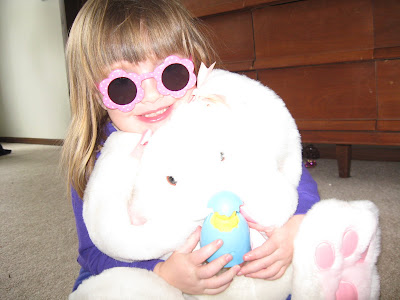 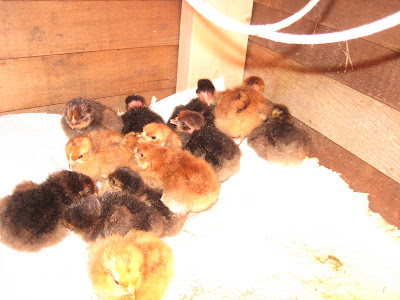 There was this van that used to drive around Durango, Colorado, when I was in college. There were many unique vehicles there at the time. This one had giant letters on the back.The letters were large and reflective and they said,


And then today I saw this. Same person? I will never know.

They made a movie of Atlas Shrugged! Well, actually, two movies. Holy cow. Could anything be worse?

We currently have a copy of The Philosophy of Ayn Rand holding up a chifferobe with a missing foot. It's very useful.

Of course, Atlas Shrugged is quite powerful. Moving, really. With a slight touch of modestly and ambiguous fortitude.

I jest. Have you read it? It's full of phrases like, "his eyebrow twitched with a hint of bashful sensuality, as clearly he detested her amorous rigidity." (Only much, much longer.) It made no sense at all. Yet, the moral was quite clear: um... unscrupulously she built a railroad and made lots of money but didn't because the one she loved was... um...

Although you really shouldn't, because everyone who does becomes a complete jerk for a few months, and then usually gets over it. Then you move on to Dostoyevsky.
2 comments:

Some of Our Spring Chickens 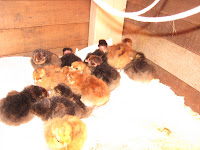 We feel like real farmers now! Hatched these from eggs.
No comments:

My Lovely Family in February

When I was seventeen, I went to Sweden for a year. On the plane ride home, it follows that I was then eighteen years old.

I had been an exchange student with the Rotary Club. When I became an exchange student, they gave me a big box of business cards. They had my name on them and my address in the US. And my picture. It was a nice picture of me. I recall being quite happy with it. Black and white. When my parents moved and didn’t tell me where, I fretted for a while and then found them, via my Grandma Ruth. Then I changed all of my cards to the new, correct address during one super boring afternoon, whilst lounging about in simple wooden furniture and eating Wasa crackers with butter and cheese somewhere in Sweden.

On the plane ride home, when I was eighteen and hadn’t slept for three days and as disoriented as a person could be, there were these two guys on the flight from Newark to San Francisco who were speaking Norwegian. Norwegian and Swedish are mutually intelligible. I kind of figured this might be the last time I would hear any Scandinaviska for a long time, so I chatted them up a bit, and then I gave them one of the five hundred Rotary Club Exchange Student cards I had left, the ones that I had updated while lounging in the ultra modern wooden furniture and eating Wasa crackers with butter and cheese. Somewhere in Sweden. And then I got home to Santa Rosa and forgot all about the two Norwegian guys on the plane from Newark.

Maybe five days later, I was sitting around the house at my dad’s, still feeling a bit disoriented. The doorbell rang. I went to the door, opened it, and there were the two Norwegian guys, standing on my dad’s front porch.

“How did you find me?” I asked them, somewhat confused.

They procured a map of the Bay Area. And my card.

Jesus. Norwegians are very literal, aren’t they? I mean, I think I may have said, “come and check out the wine country,” on the plane.

What could I do? I invited them in.

So, there I was, standing in the bright sunlight of California, two Norwegian guys on the front porch. I walked into the house, followed by two Norwegian computer programmers who were in the Silicon valley learning some new programming language. It was their day off. As mutual computer programmers, they started talking to my dad in a language that the rest of us didn’t understand: computer code. Meanwhile, my sister Lori was calling my sister Kathy to come over quick because Shanah brought home two Norwegian guys she picked up on the airplane from Sweden!

Those poor Normen had no idea what they were in for.

Kathy showed up, and it was determined that Lori, Kathy, and I should give the Normen a tour of Western Sonoma County. The five of us piled into a small rental car and off we went!

It took me a while to realize what was going on here. Lori and Kathy were single and in their twenties, and the Normen were single and in their twenties. I was eighteen. I hadn’t really thought of them as amorous prospects, in general. They were just Norwegians. My sisters, on the other hand, turned up the charm to eleven knots and determined to show the Normen the time of their lives. This is actually a bit difficult, if you are just showing someone Guerneville, but they managed to pull it off quite splendidly. Squished into the back seat of that tiny car, I began to feel a bit used; as if I had been merely bait, while my dear sisters went in for the kill.

As much as my sisters were toying with them, the Normen seemed to also be playing some sort of predetermined yet incomprehensible mating game. They were excited to play upon the mystique of their whole Norwegianness. At one point, there was some issue over operating a new camera to take our picture, and Lori suggested reading the owner’s manual. Norman #1 looked at her very seriously and said,

“Norwegians do not read directions.”

Aha. That explains a lot, thought I.

Okay, not really. I was trying to keep up with this whole charade. I had no idea what was going on here. As I said before, I was just bait.

The Normen had real names, of course, but I can’t remember them now. I think my dad actually kept in touch with one of them for a while. I remember his name was very unpronounceably Norwegian.

I guess they were cute, in some sort of Norwegian computer programmer way. At the end of the day, they went back to Palo Alto or wherever they were staying, and nothing really came of it all. It became the family story, “remember that time Shanah picked up those two Norwegian guys on the plane?”
1 comment:

I had this dream last night that I was sitting in the principal's office, drinking. I was getting loaded before I taught class. I was justifying this in my mind, calling it my "medicine". Every beer bottle I finished, I placed the empty bottle solidly in Mr. S's wastebasket, and gave him a steady, defiant gaze. He said nothing. I thought, I wonder if I'll get fired? And then I opened another. All the while, I was keeping my eye on the clock, waiting for 12:03, when fifth period starts.
No comments:

Bodkay's Favorite Place to Be 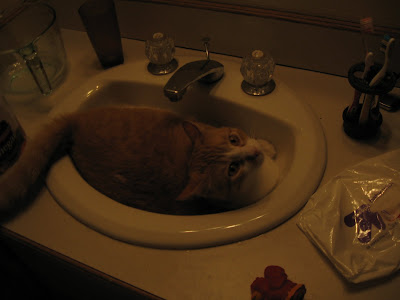 He likes it when you run water over him. Then he comes to get pet, all wet on my lap.
2 comments:

There's a word for that!

I had this friend in high school, Monique. She was a year older than I. She was an artist. We used to talk about how all of the people at school were in this Conglomerate Mass of Humanity, of conformity, and it wouldn't matter what we did in life; we would never be part of that Conglomerate Mass. (Even if we tried.) Being a visual artist, Monique would describe the theory in visual terms, and I visualized it as looking something like this: 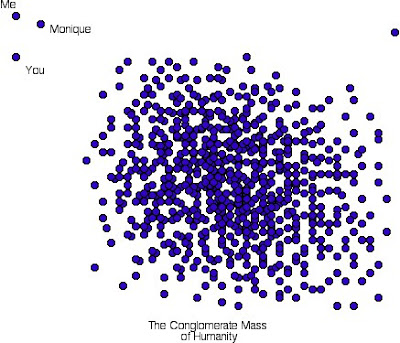 I included "You" in this rendition, because clearly, if you're here in my private blogospace, you're not a part of the Conglomerate Mass. You're special.

That's right. :) You're like a rare flower or wild lizard.

I have written here before about how I feel like an impostor at work, like everyone else there is a grown-up doing a grown-up job, and I'm just a kid messing around.

Also, I feel like other women with children are mothers, but I'm like someone who happens to have a kid. I am often confused by the things that the mothers do, and I wonder, Should I be doing that? Is there something I'm missing here? What's going on?

I feel like an anthropologist or an observer when I am actually among people like me, doing normal things. Like shopping. There are a bunch of ladies there, pushing carts around, so why do I have these sort of out-of-body experiences while shopping? What the hell is all this stuff for?

I guess it really stems from being weird by nature. I had this teacher in college who kept telling us to "think outside the box" about teaching methods, and I kept saying, "But where's the box? What's inside the box? I don't know where the box is! Good God where is this box???!!!"

But there is some hope. I almost have a syndrome. Clearly, if there's a Wikipedia on it, it's important and stuff. Hallelujah! There are people like me! I discovered today that there is a name for it: Impostor Syndrome. Of course!

Also, you should read this. Unrelated, mostly, but still.
1 comment: