On the way to the show, it was a full moon, and Bad Assed Husband (BAH) and I were talking about the coming Super Blood Moon, so BAH experimented with taking pictures of the moon, to practice. The first one, he used the flash- in the car. So I laughed at him. But as you will see, to paraphrase John Lennon, "that instant karma will get you every time." And you should never laugh at your spouse. Except when you feel like laughing.

The ceiling in the Barrymore has the constellations. We got good seats, about ten rows back. It's a small venue, "Capacity 924" written over the doorway. It's an old movie theatre. BAH and I were talking before the show, and I was thinking about how I never go see comedy, because I'm afraid the comedian will make fun of me personally, and I am too shy for that. But John Hodgman seems like a nice, respectable dude, I thought secretly. John Hodgman would never make fun of me in front of everybody.

Hodgman has a really funny bit and I completely recommend you go see him, if you are a later stop on his "Vacationland" tour. He was talking (somewhat ironically, considering what happened next) about his love for following rules, and how he so enjoys the way that the airport validates his love of following rules, when a little voice inside of me said, Shoshanah, this would be a perfect time to take a non-flash photograph of John Hodgman- for look! He is standing right in front of you, looking very Hodgmany, and well-lit, to boot! So, I snuck my camera phone out of my pocket, aimed it just right, surreptitiously keeping it low and unobtrusive and - the flash went off! John Hodgman, bless his heart, STOPPED THE SHOW AND POINTED AT ME AND YELLED IN HIS BOOMING BARITONE,

I was as terrified as I ever have been in my life. I hid behind my bunny fur sweater. I was hoping maybe a trap door would open beneath me, and I could crawl in. John Hodgman went on,

"I SEE YOU AND NOW I AM FROZEN. I CANNOT CONTINUE. I AM FROZEN BY YOUR FLASH BULB."

"I'm so sorry!" I squeaked to John Hodgman.

Beside me, very softly, I heard the delighted voice of my husband saying, "I can make fun of you for the rest of your life for this!"

"WHAT IS YOUR NAME?" said the booming voice. Judgement day. It had come. The thundering voice of Judge John Hodgman stood in judgment, and I was losing my case.

"Shoshanah, it was an accident, was it?" He was more calm, now. Perhaps he noticed I was terrified? (In person, he looks vaguely like my dad did at that age.)

"Yes, it was totally an accident! I'm so sorry!"

"Everyone," said Judge John Hodgman, "Repeat after me: 'Shoshanah, we forgive you.'"

"Shoshanah, we forgive you," said the 921 fellow fans of Judge John Hodgman. (Or maybe it was more like 200. It felt great to be forgiven. They didn't specify what I was being forgiven for, so I assume everything.)

"I forgive you, Shoshanah," said Judge John Hodgman. "And I love you... and that's the end of the show! I can't remember anything after that flash. Enjoy your picture!" He started walking to the back of the stage.

And then the mob killed me. Flash photography really was punishable by death!

This was the picture:

He didn't really end the show. He talked a lot more, and he even played a Handsome Family cover on the ukulele. The whole rest of the show, I had this existential urge to take another flash picture, just to see what he would do! But I was afraid he would kick me out, and I really was enjoying the show. And, you know, I'm a Midwesterner now. We don't do that kind of stuff -at least not on purpose.

I keep playing this, over and over again. These guys rock!

Now, it is no longer the eighties. But I'm guessing they're feeling nostalgic, because the answering machine is up again! They Might Be Giants is writing and recording a new song each week. Every Monday, a new song! And you can hear it on their answering machine at (844) 387-6962.

"What was that number again?" 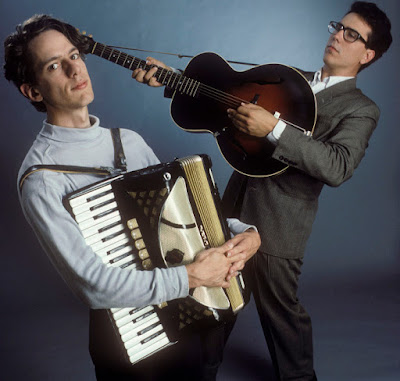 If you don't call one week, you miss the song! Holy cow! No, who am I kidding? This is not 1985 anymore. Actually, you can hear it on each Monday's edition of Slate's The Gist for infinity, I presume. But it's better to just pretend you have to hear it on Monday. It adds something.

Oh, and just in case you don't know who these guys are, this is my favorite song of theirs:

The Grim Reaper by Big Z

My daughter, who just turned eight, is passing the time this evening by drawing pictures. This one is my favorite. 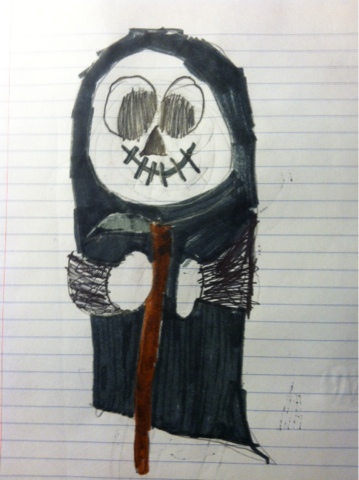 He looks very... enthusiastic, doesn't he? So eagerly clutching his scythe. I almost wouldn't mind leaving this mortal coil with him.
2 comments: 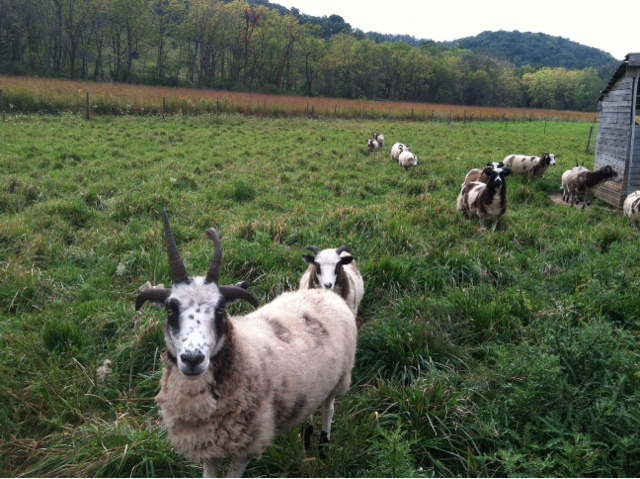 I've been working on fiber art lately- I have a lot of wool! This is made mostly from wool:

This isn't your average country song.


P.S. From the comments- My dad has a great thread on the Steel Guitar Forum about the production of this recording, which can be found here.
2 comments:

A Conversation with God

God: "A million years for you is a second to me, like the blink of an eye."

God: "A million dollars to you is a penny to me."

Too busy to really blog lately! So sorry. I'll be back in a second...

Until then, here is an unrelated picture by Teresa: 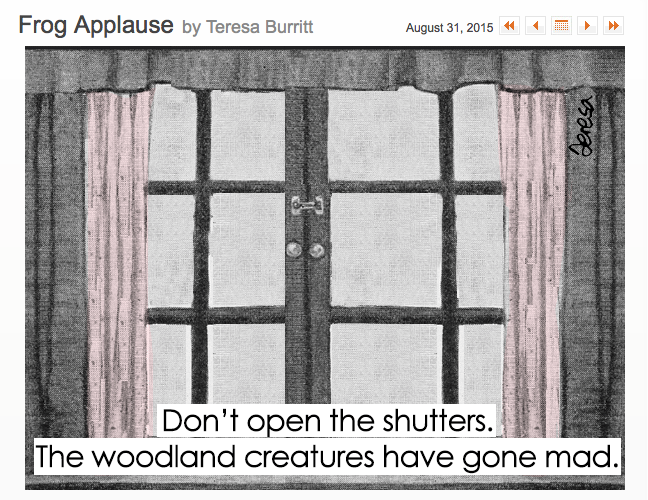 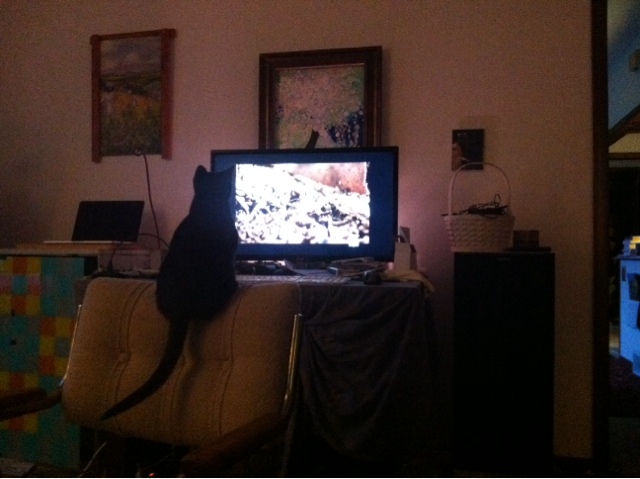 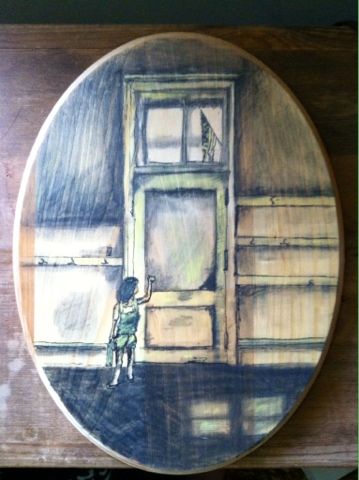 We stood outside at 7 AM on Tuesday, and the bus came and took Z away to third grade! The only thing was, as she ran across the street and hopped on the bus, her backpack bounced up, and I saw that she had a big hole in the butt of her pants! Of course.
I let her ride away on the bus, though. Once these things are set in motion, there's no stopping them. And then I fretted. She was going to a new school, a Big Kid school, and a hole that showed her underwear, on the first day? This just would not do. And so, while I would have preferred to eat my bonbons and watch my stories, and chill like a ho on a Sunday, instead I grabbed a pair of shorts (the ones with the pandas and bamboo print) and drove on up to her school.
I had no idea where to go or what to do when I got there. There were gazoodles of people! I couldn't believe it. People taking pictures or just hanging out, worrying. I saw a friend who said,
"I know it's against the rules, but I wish they would let us go inside with them on the first day!"
As she spoke, my eyes scanned the masses. Brushing aside my friend like a gnat (I feel bad about it now) I continued on my mission. I saw someone with a name badge on a lanyard,
"Where are the third graders who rude the bus?" I asked. She only scowled at me. I looked more closely at her name badge. It said she was from Saint Mary's Hospital. "Oh! I'm sorry!"
Then I ran into another friend, who hugged me, and I told her how worried I was that Z would be made fun of, on the first day of school, and she told me about Christopher and how, by his rules, his mom wasn't allowed to be there. They grow up fast!
Then I saw her! I saw Z! Sitting on the asphalt. I went up to her.
"I thought that was you," she said.
"You have a hole in the butt of your pants!"
Then she felt her arse.
"Hey!" She said, delighted, "I do! That's a really big hole!"
"I brought you some shorts to change into!"
"Awww. Do I have to?"
"What? You don't want to change? People can see your underwear!"
"I know. It's just that those are my least favorite shorts."
No comments: