"Did a shadow fall across the moon, or did the moon simply go out, extinguished as abruptly and completely as a candle?" -Madeline L'Engle, A Wrinkle In Time

Yesterday was not a school day, but Big Z wanted us to wake her at the usual time, which is 6:24. I did wake her, and we ate a languid breakfast under the fluorescent lights of the kitchen. BAH came out from his shower and joined us.

"Why isn't it light out yet?" He asked. I looked around and noticed that it was, in fact, totally pitch black out.

"Yes, maybe. But there should be some light."

We did wait until after breakfast, and still... Absolutely no light outside. We determined that it was cloudy, yes, and it is the week before the time changes, but still. There should be some light.

So we waited a little bit longer... And I was thinking about the Road and how during that whole book, the sun never comes out, but they never explain why...


And then we all three figured out at about the same time what was going on: the power had gone out sometime in the night, and made our alarm clock skip to twenty-one minutes in the future... Which, combined with an unusually cloudy day, made the sun apparently come up a half an hour late.

I was relieved. We will not be living out the rest if our days in darkness. Phew. Dodged that bullet.

Nightmares Make the Best Books: Annihilation and House of Leaves

I've always believed that House of Leaves by Mark Z. Danielewski was a great book.  (Not to be confused with House of Pancakes.) My esteem for it has only increased with time- because I still have nightmares about it, still, eight years after reading it. I have a recurring dream that I go into my basement, and there's somehow a whole other house down there, and it's full of scary people or things unknown. The other one is that I go up into the attic, but then the house keeps going on, up, up, up into the sky, and when I try to go back downstairs, I've lost my way, and I'm teetering over a ledge, hanging over an abyss, with the wind whipping at me. If you've read House of Leaves, you understand how these dreams are about that book. If you have not read House of Leaves, what have you been doing with your life? 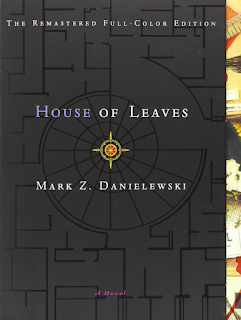 Now I've recently read another one that has been haunting my dreams. Annihilation, by Jeff Vandermeer, is apparently the first book in a trilogy- though I have only read the first, thus far. It's a quick, easy read- totally the opposite of House of Leaves, actually- but thrilling and terrifying, never the less. It definitely has a Lovecraftian feel to it, with the same sorts of themes and strange happenings- nature turning rotten, suspected alien influences, human like creatures that- well, I don't want to give it away. 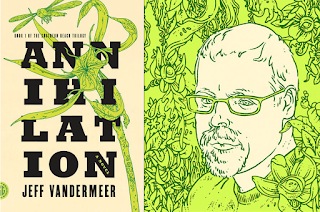 The dream I had was that my husband drove up to me in my old 1982 Ford EXP- the one I wrecked in the Mojave desert years ago. I opened the door to get inside, and he was smiling and beckoning for me to get into the passenger seat, but I couldn't bring my self to do it because the entire interior of the car was made of flesh. Muscles and tendons and stuff. He had his hand on the gear shift, which was a muscle. He seemed completely oblivious that anything was amiss with the car.

So... if you read Annihilation, you'll understand why that is a related dream. But it's not what you think.
7 comments:

Music Monday: You are a fluke of the universe.

Someone shared this with me on Facebook, which kind of made me wonder... but I love it.

The Dowager Stout or Confusion About Beer


The following is a trivial conversation between two married people about trivial issues. It is trivial. Sorry to bother you. Excuse me. I will now go into my secret *beer cave with the Dowager Countess Stout- no relation.


Me: What was the kind of beer I was supposed to get? Dowager Stout?

Me: Was it Dowager Stout or Derringer Stout?

Me: Dowager? Stout? The kind of beer you like?

Me: I think it would be more correct to say, "Who is the stout dowager"?

BAH: Not if it's her name. What if her name were "The Dowager Stout"?

Me: Any self-respecting woman whose name was "Stout" would change it.

Me: Well, no, I guess the Dowager Stout wouldn't change her name, would she?


* In case you are wondering, yeah, I did buy some beer. Imperial Stout.
3 comments:

To continue with a series I left off five or ten years ago...

I'm sorry, mom... found by a friend of mine in a bathroom in Nebraska. 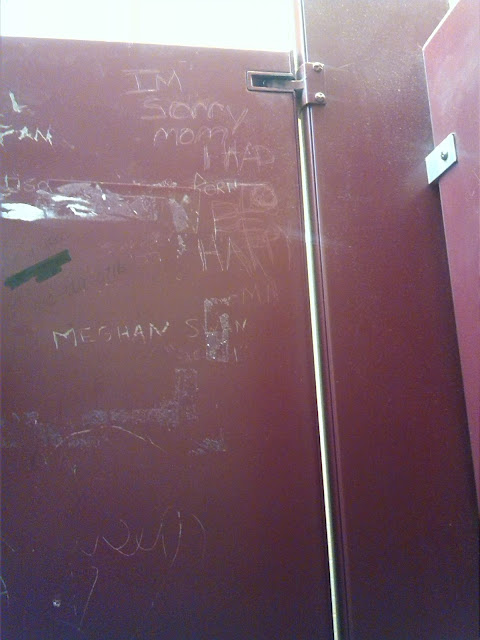 This week, something different. There is this podcast I discovered about song writing. Interviewer Hrishikesh Hirway goes to a person who wrote a song. Then he asks the musician how they created the song, and they take it step by step- and you listen.

It doesn't seem to matter if you like the music or not. It's equally interesting.

I'm having lots of fun making more mustachioed sheep-deer-like creature heads lately. I even made a little movie of the process: 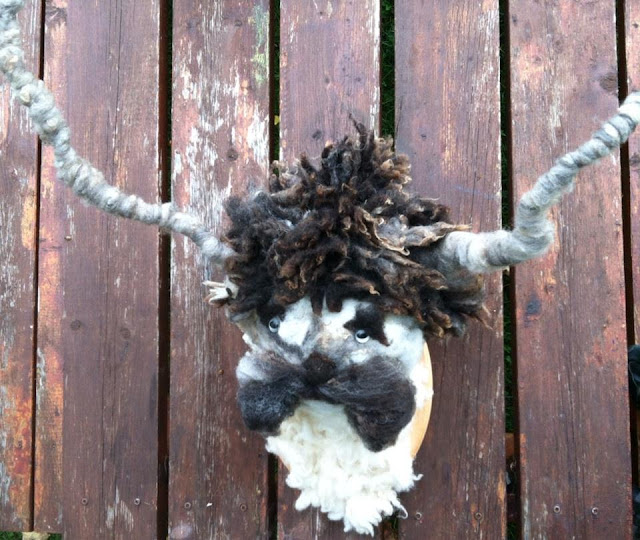 For sale here. :)
The end result is a silly and fun loving faux taxidermy piece, reminiscent of childish dreams and imaginary places where anthropomorphized animals with mustaches gladly lay down their lives to become wall decorations.
No comments:

Today, I discovered a Flaming Lips cover of "Lucy in the Sky with Diamonds" with Miley Cyrus, but the video is so unsafe for work (but so cool) that I hesitate to put it here! It has boobies and fannies (naked ones) that may or may not belong to that super NUDIST Miley Cyrus WHO PROBABLY SECRETLY COMES FROM FRANCE! They also scream the F--- word, a verb which, as you know, I try to avoid whenever I'm in France.

So, if you who are not at work and not bothered by swearing and indecency, or if you really would LIKE TO BE FIRED FROM YOUR JOB,  click here for a great cover of "Lucy in the Sky with Diamonds." I'm sharing it because I love it.

Have I Told You Lately That I Love You?

I feel like I should put this in my scrapbook of 2015, to keep forever and ever. Except that I don't have a scrapbook. I have a blog. And also, this is a tweet. So, I'll put this here, in my blogger scrapbook:

I feel special. Thanks, John.

I highly suspect that John Hodgman says "I love you" to all of his devoted fans- but that doesn't actually make me less special. Because love is infinite. And, if you think about it, saying "I love you" is a really good way to keep devoted fans.

Have I told you lately that I love you? Thank you for reading.