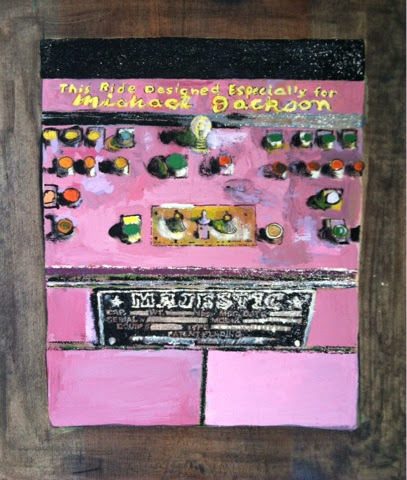 ... Until you've walked a mile in my shoes. (These Little Z's shoes, but still.) 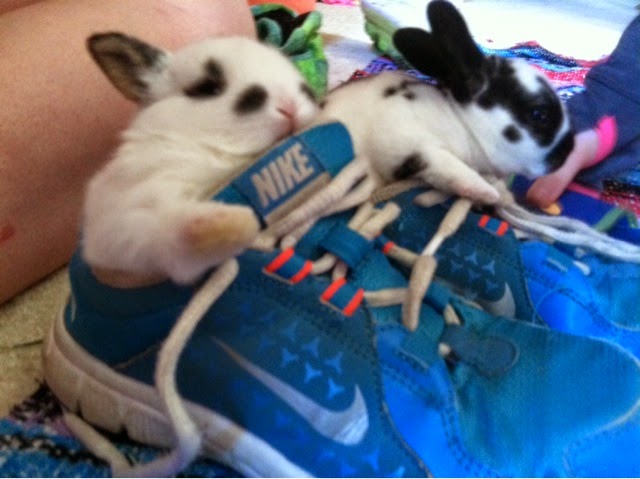 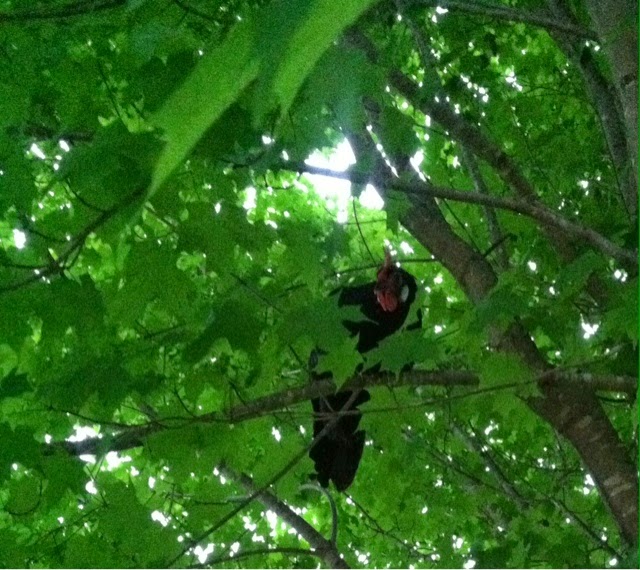 This is that crazy chicken who always runs by me and screams. She has been living in the rhubarb patch- the other chickens don't let her stay in the coop with them. Poor thig. And now, tonight, she has perched in this tree outside our back door. I've never had a tree dwelling chicken before. I hope this works out for her. The only problem is that she still seems to scream at us a lot, and now she's right outside the door.
4 comments:

Last night, the younger flock of chickens, who roam free, would not go inside. They preferred to stay low in some tall grass. I finally caught them all and put them into their rather flimsy coop, but it wasn't easy.

I said, "God natt, sov gott," and went to sleep in the second story bedroom of our house.

I slept like a person who sleeps well through life-changing weather events. (I could say I slept like a baby, but babies wake up a lot in the night and cry.)

In the morning, BAH got an email that said something to the effect that if he had planned a meeting in a certain meeting room at his work, he needed to find a new venue because the meeting room was destroyed by a tornado last night. And then it turns out there was more than one tornado. So, I slept through multiple tornados. When I was a baby, we lived right next to a highly frequented railroad line. It was sort of like that scene in the Blues Brothers where they go home to their flat. Or so I imagine. And ever since then, pretty much my whole life, I can sleep through anything.

I do remember some flashes of light last night, vaguely.

BAH has this new eye mask, which blocks out the summer light here in the Great White North. He did not see lightning due to the eye mask. I originally thought he said, "iMask" and that I was out of touch with new Apple products. So, he slept through it all, too. Little Z saw the lightning and went back to sleep.

All in all, the chickens would have been safer from tornados in that little place where they wanted to stay. The chicken coop is high up and flimsy. But it did not fail. Also, the hops poles stayed up. Yay!

Not to change the subject, but we seem to have a chicken with mental health issues. More on that later.

Perhaps next week a swarm of locusts or an army of frogs will descend upon us. And everything will be fine.

I'm sorry I haven't been writing the Paris book. It's too much work here in Spring. And there's an art show, soon! I must paint pictures. Perhaps I shall paint a picture of the chicken with mental health issues, because I have trouble describing it in words, the way it looks at me when it runs by, screaming, with those blaming eyes. Animals don't usually judge. Have you ever noticed that? But I'm quick to judge them. Here I am, calling a chicken crazy.

Good night, friends, and may you always sleep through tornadoes and awaken unharmed. 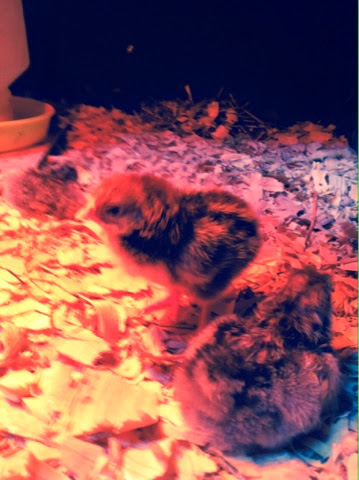 These chicks weren't due to hatch until tomorrow, but they hatched yesterday. They are literally early birds. No worms yet, though.

It's turning out to be a very good year for gardening. Little Z and I were just out picking strawberries for an hour or so. The whole time, I had this terrible song going through my head, "A Very Good Year," which I think may have been a Sinatra number originally? Anyway, the version in my mind was William Shatner singing it. It's already a horrific, misogynistic, sappy, rich boy growing old freak fest, and then you Shatnerize it, and it is... just awful. Just. Awful. Just. Awful.

But there it was, in my head for an hour, strawberry after strawberry. 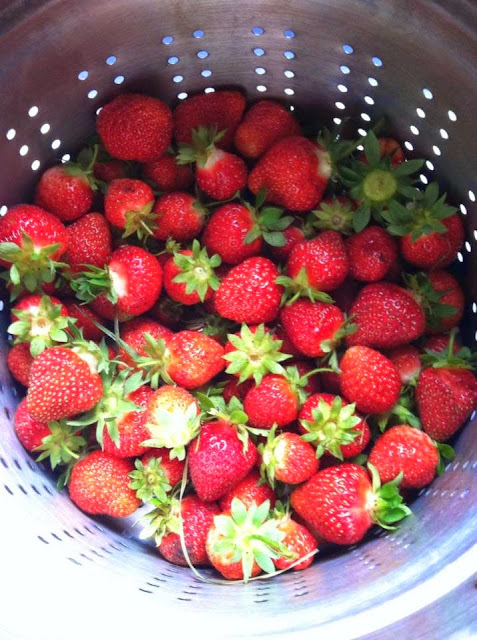 Sorry I haven't posted much lately. It's just, you know. It's a very good year. It's hard to write about good things. All the meat is in the disasters.

This song is just so terribly wonderful. Forget everything I said. I love it.

Bunnies in the Buff!

The Annual Cutting of the Sheep's Hair

I use scissors to cut the sheep's wool. Those electric cutters sort of scare me- though I hear they drown out the swearing pretty well. 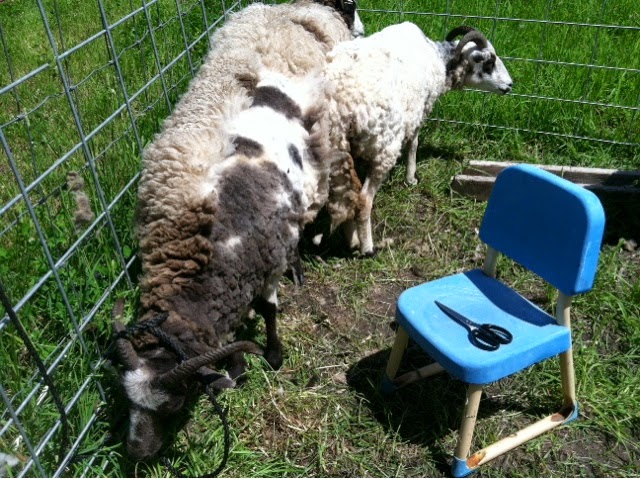 It comes off in big bunches that look and feel like blankets, but if you pull just a little, it all falls apart. 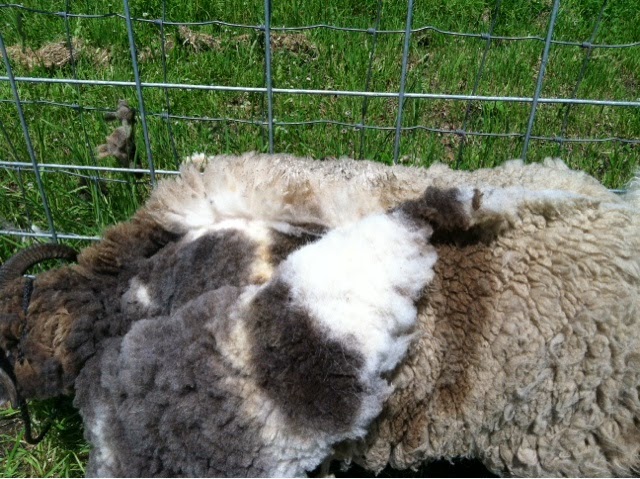 It feels like the best stuff in the world. After a day of sheering, your hands are smooth as a baby's bottom. That's the lanolin. It doesn't feel like processed wool at all. No itch! 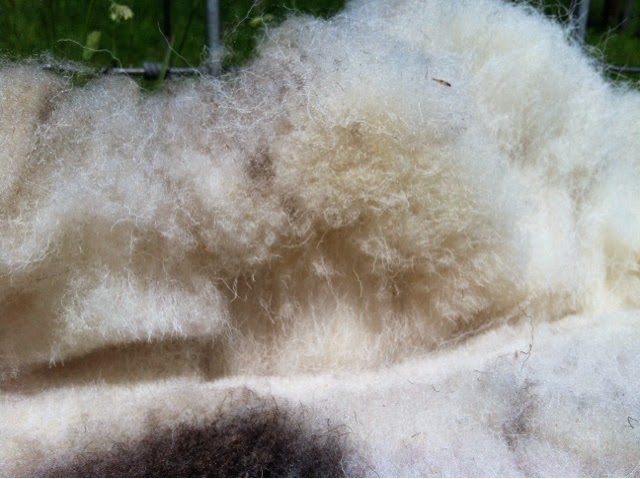 The end result is a sheep who looks like a goat. She wouldn't win any beauty pageants, but I don't know why they have beauty pageants for sheep, anyway. It's not good for their sense of self worth. 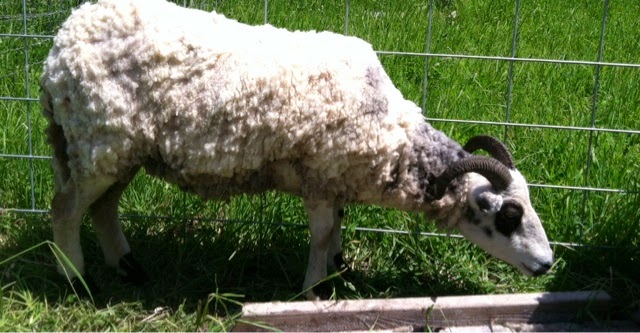