What should the title of this photo be? 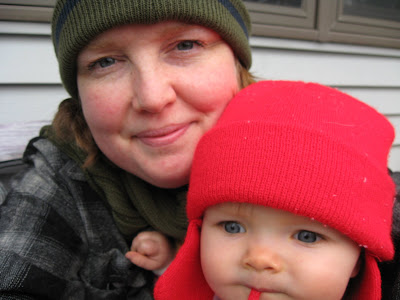 I guess you can tell I want Obama for president.

People are getting really worked up over this election. It seems like the pundits are really stuck on the fact that it's not over yet, like they think it's drawing out endlessly, this choosing of the Democratic candidate. Well, not just the pundits, EVERYONE is getting a little sick of it, right?

We're so impatient. I bet we'll all look back on this as an intensely interesting time to be alive.

While I'm commenting, I guess I'll tell you my opinions:

In the beginning, I thought I liked all the candidates- McCain included. He's always been one of my favorite Republicans. (Believe it or not, I have on a few occasions voted Republican, though never in the presidential race. I've more often voted for the Green party. I guess I'm one of those people they really campaign towards, since I change my mind a lot.)

A few months later, I started getting really disgusted by McCain's war-mongering attitude, and his idiotic health care plan, so I opted not to vote for him no matter who the Democrat is.

At the same time, I was very taken with Obama's speeches. I just like listening to the man talk. It's so refreshing, after Bush Jr.! Although I could barely distinguish Obama's ideas from those of Clinton's. And yes, I realize that "change" is a pretty vague notion, but I am so tired of being a cynic. I want someone to believe in. Call me naive. Go ahead. You won't be the first.

Obama's speech about race in America (his reaction to the whole preacher scandal) was great, in my humble opinion.

At the same time as enjoying Obama, I started to dislike Clinton's rhetoric. Clinton has a really hard time admitting she was wrong, apologizing, admitting she lied. She seems to want victory at any cost. She seems petty. And she even unearthed Obama's kindergarten records. Come on! Although I recall at one time in the nineties wishing that she would run for president!

I have a pet peeve about how Clinton is treated by the media- namely (pun intended) they often call her "Hillary". I see that as disrespectful towards her, and it irks me because it is only because she is female. It's not as bad lately as it used to be- they don't do it as often. I mean, I understand that her husband is very famous, but I think we all get that SHE is running for president now!

All in all, though, I think it's so fantastic that we are having trouble deciding between a female, a person of mixed race, and an ancient old geezer for president! Okay, I'm not that excited about the ancient old geezer, but still. It is an exciting time to be alive right now.

It's funny how the main stream media doesn't quite know how to deal with it, sometimes. They treat it all like business as usual, trying to pick out their sound bites and such. I think the American people know this is not business as usual anymore. This is in our lifetime, a brother, a sister, and a freakin' prisoner o' war racing for the white house! Wake up! This is history, right before your eyes! Smile! The times, they are a changin'

the Tao of Cool

I love the lyrics to "Fight Test" by the Flaming Lips. I won't put them all here, but it starts like so:

And as the song goes on, it kind of tells a story about discovering that some things are worth fighting for, and there isn't always a virtue in being cool.

I like it because it speaks to how you grow up after you grow up. You stop being a child, but it takes a long time to learn that it's not really about being cool.

Of course, there's a double meaning to "cool" in the song: cool as in adolescent cool, and cool as in not getting worked up and fighting.

And the irony, of course, is that when you stop being cool and seeing cool as so important, that's when you really start to be cool, inside and out.
No comments:

Pop Quiz: What food has these ingredients?

Having a baby changes how you perceive time.

It starts with sleep. That's the most obvious thing, anyway. Pre-baby, I generally got mad at people who woke me up. Adults don't usually wake each other up without a darn good reason. A baby, on the other hand, might wake you up just because she's awake and would like to play with you. I used to sleep nine or ten hours a night. Now I need seven hours to feel really great. A night of uninterrupted sleep is like a gift from heaven.

Then the next thing is productive time vs. baby time. Baby time is time you spend with the baby. Productive time is usually when the baby is asleep (like right now). Basically, when the baby is awake, you don't get much done. At first, this feels like being robbed of a lot of time. Until, I don't know when, something happens- or at least it happened to me- gradually, I guess. Instead of feeling robbed of productive time, I feel like I've been given some sort of Zen-like moment-by-moment-life-appreciation time.

Today, while I was watching Zelma play on the floor of the living room, as she carefully examined, over and over, a block with the letter "X" on it, I decided to eat a carrot. As you may well imagine, I got up, went to the kitchen, and came back with a carrot. I sat down and started to eat the carrot. Zelma then, upon hearing the crunch of the carrot, looked up at me as though I was doing ABSOLUTELY THE MOST AMAZING THING SHE HAD EVER SEEN! So, I felt the need to explain myself. "I'm eating a carrot," I said. She looked at me like, "no? really? that is amazing! do go on!"
"Well," I said, "carrots are really tasty, and as you can tell, very crunchy." I demonstrated by chomping. "You eat carrots, too. This is what the carrot looks like before they grind it up and put it in that little jar for you to eat." Chomp, chomp. "Carrots are best eaten as a snack, I think, because they take so long to eat, especially a big one like this." Chomp. "They're good to eat when you don't want to spoil your dinner, because they give you something to do, but they aren't all that filling. I really like carrots."

You might think that this is a very boring speech about the carrot, and you're right, but Zelma thought it was great. Which made me think, gosh, why don't I eat more carrots? They really are something! And after a while, I realized I had somehow passed twenty minutes by eating a carrot and telling a very small person about the joy of carrots.

She likes, for example, to watch plants blow in the wind. I mean, who does that? I do, now, because she needs someone to hold her on her lap while she does it. And now I spend time sitting, watching plants blow in the wind. And wonder when it was that I forgot how nice it is to go outside, early in the morning, and watch nature. Just watch.
2 comments: 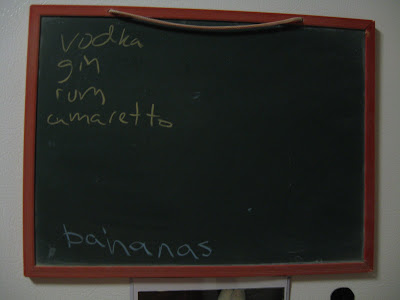 You asked for it, so I took the Zombie quiz...

The following entry will be entirely (almost) in Pirate Talk:

with us. I be sportin' a black bathin' suit befittin' a pirate lass takin' a leave of baby rearin', whilst the gurgglin' youngin' be sportin' what has been said to be an

We be splishin' and we be splashin'. We be swimmin' in the baby fashion. Then me looks askanse and me be noticin' the

be residin' with a beardless hoodwinkin' daddy and his spritely young lass.

So, me taps him on his shoulder.

there. Me thinks they belong right here, with me youngin'. *

-Yeah! he be sayin' right back, and not a thing be he doin' about the unjust situation.

. Zelma the babe be happy and suckin' on her toes, as is her want, while I be smolderin' and sharpenin' me sword blade. Minutes pass and not one

So, me taps him on his shoulders.

- Ay, mate. AS ME BE SAYIN' TEN MINUTES PAST THE HOUR, you be usin' me youngster's

there. Me thinks they belong right here, with me youngin'. *

Then, me be thinkin', and thinkin' good. And me thinks he be a hard of the hearin'. So me be usin' the sign language me be learnin' in the Sing and Sign class me be takin' with the youngin'. Me says in the American Sign Language,

belong to me baby.

- No problem, says I, in me noblest way.

Then, he be takin' away

from his youngin', and the youngin' starts a screamin', and me be sayin' there ought to be some arrangement we be makin', and we be decidin' one babe can have one

and one babe can have the other

We all be happy with our

Apparently, he be hard of hearing.

Last thing me be thinkin' be that

be some sort of "useful phrase" in American Sign Language.

* This is a paraphrasing of the actual words exchanged.
4 comments:

Zelmarific readers know that we went on a trip to California recently. We had a nice trip. Here are some pictures with short explanations: 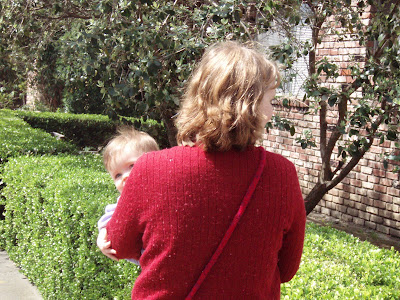 This is the view I never see. 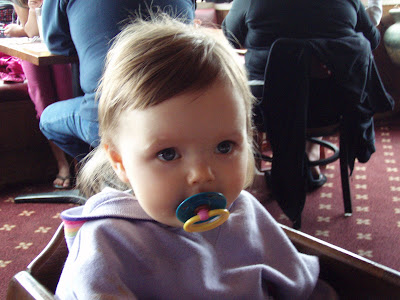 Zelma at the restaurant in Half Moon Bay. About a month and a half ago, I was terrified to take her to a restaurant. Now it's old hat. She's actually quite entertaining at times. She grabbed my glass of ice water and poured it on herself. 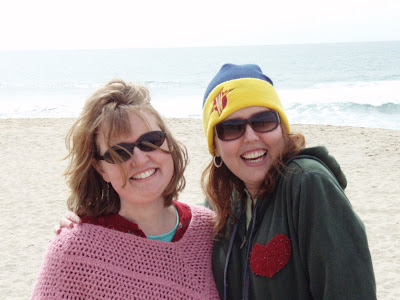 Me and Jennifer, or Zgjenyue, as I call her. Don't we look fabulous? I sewed that heart on her sweatshirt. It used to be mine. She gave me a tangerine track suit in exchange. 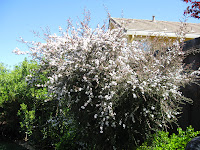 A pretty flowering bush in my parents' backyard. 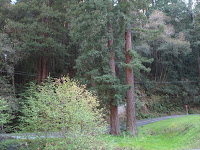 The redwood forest by La Honda, where my dad used to drive for a gig in a biker bar when I was a kid. He drove from Sebastopol. That has to be two or three hours away!


Zelma and Brian, playing in the backyard.

The weather was perfect. Occasionally, someone would say, "it's freezing!" which was quite funny. When we got home, there was still ice over my hostas.
No comments: