"The beatings will continue until moral improves."-*

Or, also, the shearings will continue until moral improves. 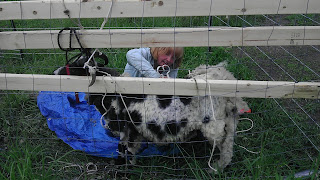 Somehow, I'm never as glamorous in photographs as I feel, you know?

Yes, we sheared another sheep today. It went much, much, much better. I learned how to use the real sheep sheers- the manual kind, not electric. It went fine. The only thing is, it took three hours to do one sheep. So, one a day.

Then we went the the fair. 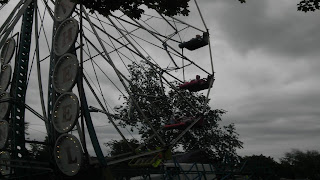 That's me on the ferris wheel. I mean, that's what BAH says. I'll take it on faith. That ferris wheel absolutely terrified me. The support beam in front of me was bent. Also, there was a sign that said, "DANGER: DO NOT ROCK CAR." And the kids on the one car were totally rocking the car! Also, the people behind us were screaming. A lot. Also, there's just that little tiny bar holding you up and OH MY GOD it's high up!

It was loads of fun.