A birthday box arrived from Great-Grandma Ruth (the lady behind the blog title) today. I was going to have the soon to be two-year-old wait until her birthday, but then she figured out exactly the perfect spot to place her step stool to get to the sharp knives, so I yelled out,

"Hey! Great-Grandma sent you a box! Want to open it?"

The box turned out to contain some nice clothes, some candy, a stuffed tiger, and two small boxes of Total brand cereal. 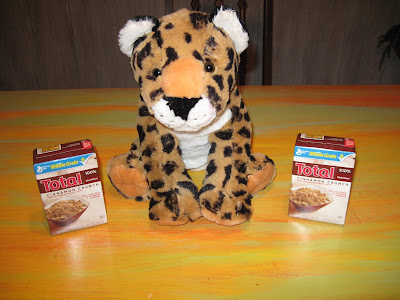 "It's a tiger, actually." (Now I'm thinking maybe it's a cheetah, but I don't want to confuse her again. I'm not well schooled on the big cats.)

She colored the sidewalk with Tiger. She walked Tiger to the park (or half-way, at least) in her stroller. She pushed Tiger on the swing and went down the slide with Tiger. In short, a very good gift from her Great-Grandma.

But what about that Total cereal?

I thought of some reasons she may have put two boxes of Total in the birthday box:

1. Grandma ran out of packing supplies, and thought the cereal would do, and as an added bonus, we could eat it later.

2. She was worried about Little Z's nutrition- but, if you know her, I don't really think this one is it.

3. She thought it was good toddler snack food, like Cheerios.

4. She thought the tiger (or cheetah?) needed something to eat on the long haul in that box from Pennsylvania to here.

Actually, I think number four is probably the most likely. I mean, Tiger Baby would not be the first tiger to enjoy cereal, right?

Vote in the silly pool on the right! What else do you have to do?