We went to pick up the ducks on Tuesday last. We also had chickens due to hatch the same day. I looked up on line if you could put the two species together in a brooder box, and most places said no, because the ducks would make the chickens too wet, and also because the ducks grew so much quicker that they would barrel over the baby chicks and hurt them.

We actually purchased two types of ducklings: Mallards for pets, and White Pekins for eating. As soon as we put them in the duck box, we noticed that the White Pekins were much bigger and much messier than the Mallards, who were just peaceful and little and cute. Nobody was getting hurt as yet, but Little Z was disturbed enough that she thought we should immediately separate them. We only had the two boxes, though, so we had a quackdry: Should we mix species that we had read should not be mixed, or should we separate based on size? We separated based on size.

Tuesday we also had a lone chicken to put into the box with the Mallards. Sadly, my camera was broken when we put the first chicken in with the Mallard ducklings. This one lone chicken stood on one side of the box, and the eight Mallards on the other side. The chicken was thinking, "Who am I?" The ducks were thinking, "What is that?" I was worried the ducklings would pick on the lone chicken. I needn't have worried. Those Mallard ducklings are so gentle. That evening, the chicken was snuggling in the middle of the pile of fuzzy Mallards, staying cozy warm. It was heart warming. Seriously.

The White Pekins, in the other box, had poured all of their water out and pooped absolutely everywhere! They are crazy messy. Although, they are photogenic.

Now, the baby chicks in the one box outnumber ducklings two to one. Everyone seems happy. Miracle the chicken is the clumsiest thing I've ever seen, but he's still doing okay.

Little Z loves her Mallards. She gets up every morning at the crack of dawn to feed them and check on them. 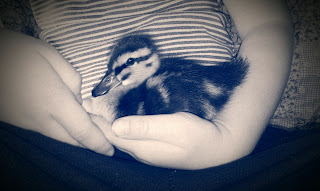