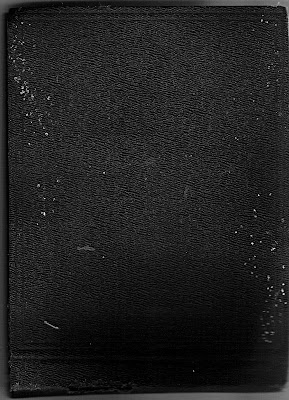 One of my favorite blogs that is just a blog- that is to say, someone just writing about his or her life and general musings- is "Flippism is the Key". This is written by Professor Batty, with whom I don't have much in common, but I still really enjoy it. I think that's the best it gets in the little blogging world: taking an interest in someone else's life for no particular (obvious) reason.

Professor Batty sometimes posts old photos. I've enjoyed them quite a bit. He writes about the people in the pictures. Silly me, it only occurred to me recently that I might do the same thing! Also- well, I'm ashamed to admit this- I just figured out how to scan pictures! All the older pictures I've posted were scanned by someone else, generally my dad or stepmother.

Now, with my newfound skill, I'd like to post some old pictures. I inherited a chest of them, really, but the ones that are the most interesting are the ones where I don't know a thing about the people. I was left these pictures by my grandmother, who (as noted before) was not a great talker. The pictures don't generally have any names or dates on them, either. It's all quite a mystery, really. I like to look through them and hypothesize. I'm pretty sure about which person is my great-grandmother, just from how she looks so much like my grandmother, yet isn't her.

So, I'm going to post some pictures from this black, unlabeled old photo album. I won't post them all, just the ones I find more interesting. I think the benefit of my grandmother not telling me anything about them is that now they are a blank slate! We can surmise as we will.

The one thing I do know about my great-grandmother is only this: She died when she was about my age now (35) or younger, from making tea. She had the boiling water and somehow spilled it on her lap. The burn became infected and she died.

Great-grandparents are thought of as old, and yet mine never even lived to be middle aged.