We ended up ordering our chickens on the internet, because getting chickens in the mail just seemed too bizarre not to try. On a whim, we got the variety pack of twenty-five dual-purpose (those that both lay and are good to eat). Then we got five of the Brahmas. The company threw in an extra dual purpose, and an extra "exotic" chicken. They were supposed to come this week, and although we really didn't believe that the U.S. post office would deliver anything on a Sunday, we built a box to put them in (TLBP built most of it out of an old bed that he built us a few years ago) just in case. We bought heat lamps and feed and feeders and watering stuff, too.

Well, just in case happened! At ten to eight this morning, I was awoken by a phone call from a frantic postal employee in Madison trying to figure out how to arrange us picking up our chickens on a Sunday. She just talked and talked. She was freaked out. I was sleepy. Three phone calls and two hours later, we were waiting for a guy named Guss at the Mt. Horeb Post Office. 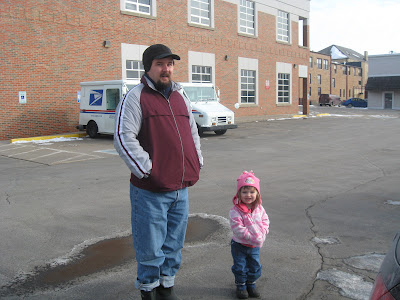 Guss was really nice. We could hear the chickens chirping as soon as he opened the truck. They chirp really loudly when they're cold! This is the box they were in. 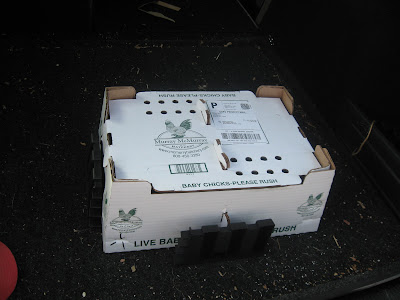 I took a few videos today:

They are much cuter in person. The infrared makes the video look odd.

We don't know which one is the exotic chicken (or what any of them are, for that matter). We'll just have to wait until they get a little older, and see which one clucks with an exotic accent. "Le cluck!"