My favorite toy as a child was most definitely my doll house. Though I would share it, when asked to, I definitely preferred to play with it alone. It was my own little fantasy world which I did not want to share.

I recall an argument with my best friend, Nikki. I didn't like going to play with Timmy, because he was a boring, whiny little brat, and the only reason anyone liked him was because he had a whole garage full of toys to play with. I refused to go over there on principal. Nikki insisted that I didn't understand, because I had so many toys. I was spoiled, myself, like Timmy.

I think- though my memory is hazy- that I got the dollhouse for Christmas in 1977, when I was three. I've always had the impression that my dad built it from a kit or a pattern of some sort, but I'm not sure. I do know that it was a lot of trouble to get it. The furniture of the dollhouse was partly store bought, partly made of thick paper by my then Uncle, David. (Lou and he later divorced and now she's married to Bucky.) We all lived together in a flat in San Francisco around that time. (I have fond memories of hanging on Uncle David's arms- he would pretend that they stretched out. Then he would give me government cheese to eat, which I loved.)

Surprisingly, the paper furniture is still very serviceable. The refrigerator door has been retaped a few times, but the range is in fine shape. 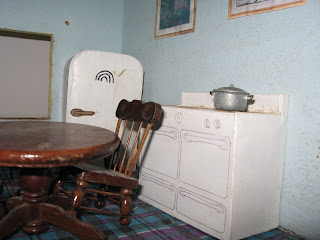 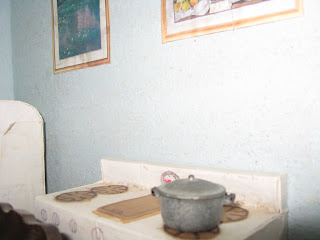 The television, I'm sorry to say, has seen better days. The best part about the TV was that you could put little people inside of it, and pretend your dollhouse people were on TV. 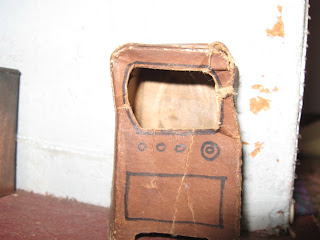 The couch is in excellent condition. It is perhaps a prediction of my past-future self that my dollhouse had two pianos: an upright and a baby grand. 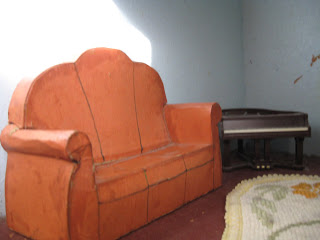 Over the years, many dollhouse people came and went. There were the initial plastic people, with their inexplicable doppelganger cookie monsters. There was that Chinese family- they kept to themselves, mostly. (I'm not sure they spoke English.) They enjoyed sitting on the couch, as they were the only members with bendable limbs. Then there was the mailman, who disappeared inexplicably, but left his mailcar as a sad reminder. Currently, there's an out of work construction worker and his pet crocodile. Elvis is enjoying a second career as a babysitter in the nursery upstairs (although he hasn't changed his clothes yet for the occasion) and Gumby and Pokey showed up a few years ago, apparently finding our house a nice retirement home. There is one Chinese Grandma still lingering, though unfortunately Little Z stuffed her in the coat closet yesterday. 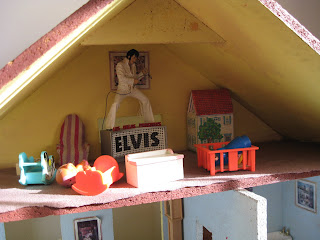 Which brings me to the latest chapter of the Doll House Saga: Little Z is now allowed to play with the doll house. We just moved it to the new house, and I took all of the dollhouse people out of my tote bag and introduced her to them, one by one. Then I left her alone to play. 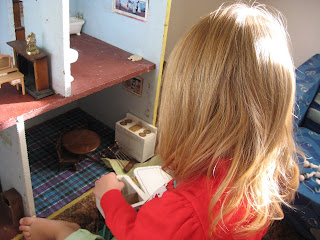 When I peaked in on her, she was potty-training the little plastic baby. Then she pet the crocodile.